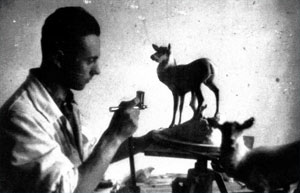 The largest group of the moldings produced in the Allach porcelain manufactory, in terms of the number of models and thus also the number of pieces produced, occupies that of the animal models in the porcelain categories. Theodor Kärner, at that time one of the most famous animal sculptors, who studied his models carefully, be it the movement sequences or the phases of rest, which he also recorded in pictures and sketches, designed most of the animal figures at Allach with 36 models. Thanks to their perfect naturalistic shapes, these models are still among the most sought-after animal figurines.

The designs by Adolf Röhring: mice, birds and the rising horse are also among the pieces sought. Particularly noteworthy here are the two large models # 128 Jay and # 129 Magpie. These always achieve prices in the five-digit range if one of them is offered on the market.

The various animal designs should not only serve the German people as art objects, but also contribute to relaxation and bring the beauty of nature closer. The animal figures should embody the love of the Germans for the animal world and their attachment to nature.

You can also view or download a PDF catalog of all porcelain animal figurines here: